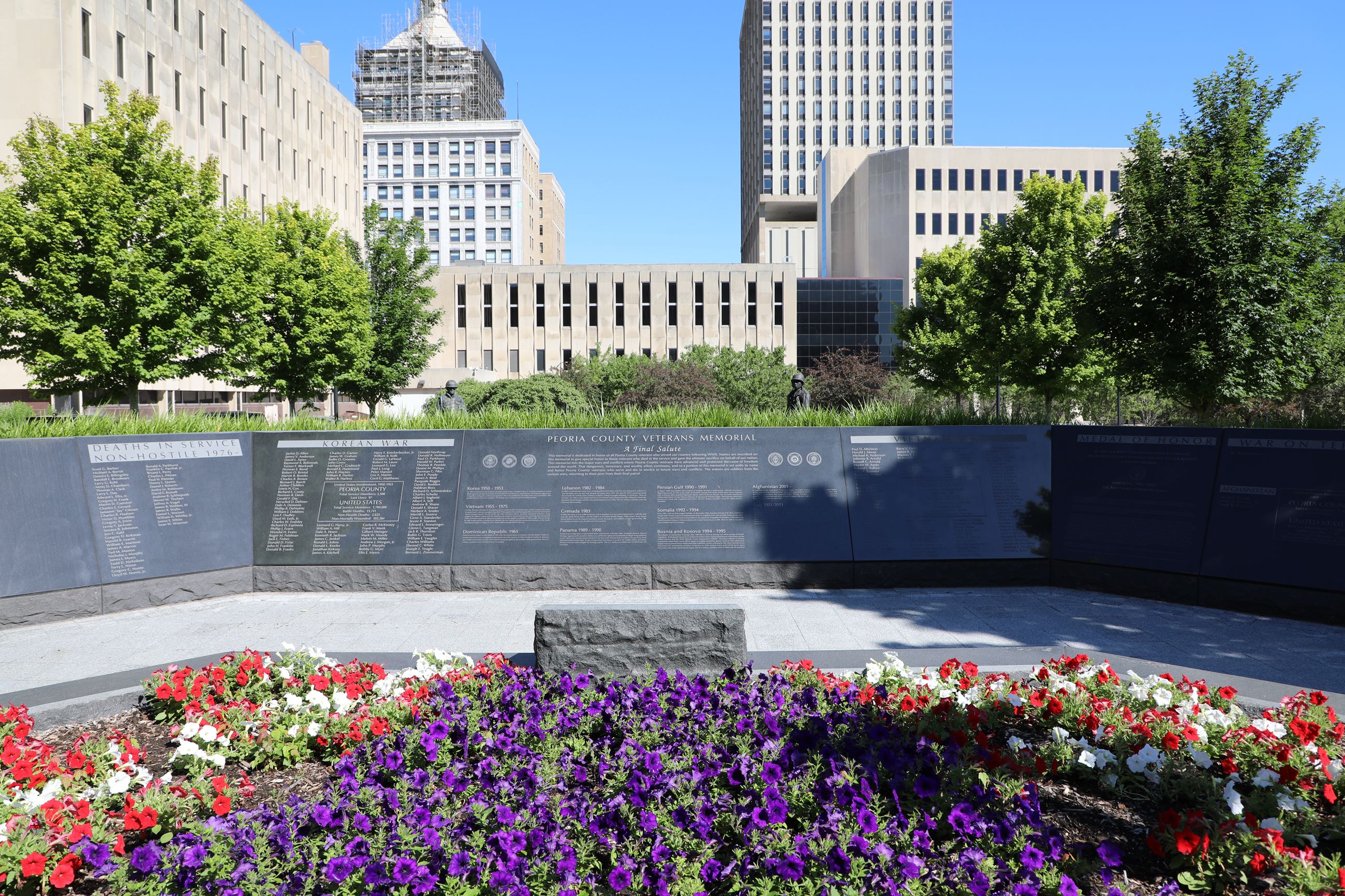 Many Peoria County citizens gave their lives in defense of freedom in numerous conflicts since World War II. A Final Salute honors veterans of the Korean War, Vietnam War, Grenada, Panama, Gulf, Somalia, Haiti, Bosnia, Kosovo, Iraq, Afghanistan, and the War on Terrorism, as well as any future conflicts - completing the War Memorial Project. The memorial provides a beautiful place to remember our loved ones, as well as historical education for generations to come.

A Final Salute was dedicated in October 2018. The keynote speaker was Retired Lieutenant Colonel Harold A. (Hal) Fritz, US Army Vietnam Veteran and Congressional Medal of Honor Recipient.

Dedication Ceremony of A Final Salute:

The Peoria County Veterans Memorial is a fitting addition to the Peoria County Courthouse Plaza. It is a place for visitors to reflect and reconnect with history. It also provides a quiet place of peace and serenity; a fitting tribute to the residents of Peoria we wish to honor. The memorial is located on the center section of the courthouse plaza facing Adams Street, between the Soldiers and Sailors Monument and the World War I and II Memorial.

The design concept was conceived by Jim Ash Designs, with the design team being Terra Engineering. The contractor was William Aupperle. Thirty-three tons of granite were required to complete this memorial. The memorial lists 106 names of the fallen from Peoria County during the Korean and Vietnam Wars. The memorial construct also allows additional names to be engraved if necessary - as well as providing a brief history of the many conflicts and wars from Korea to the present and beyond.

The memorial is guarded by three bronze statues of individual soldiers in a vision of soldiers on patrol, returning to their field base. The statue "War Dog" by Erin Mallon was permanently loaned to Peoria County from nearby Wildlife Prairie Park. It depicts a Vietnam service member and his dog. Service dogs in Vietnam would warn their handlers of approaching enemies and detect land mines. The statue was originally commissioned by Wildlife Prairie Park founder William Rutherford.

The Veterans Memorial Committee commissioned a second statue of a Korean War service member from local artist Preston Jackson. It stands to the left of the War Dog statue.

The third statue, "Lady Liberty: Monument to the First Female Fighter Pilots," was dedicated on July 3, 2021. The keynote speaker was Senator Tammy Duckworth, a US Army veteran and former helicopter pilot. This final piece of A Final Salute was sculpted by artist Darwin Wolf of Sioux Falls, SD. It is of a female fighter pilot, representing the first frontline women officially recognized in combat beginning in 1994. A statement submitted by the artist is available here (the views expressed herein are the views of the author and not necessarily of Peoria County): Lady Liberty Artist Statement.

Journal Star article on the 2018 dedication by Andy Kravetz and Steve Tarter: https://www.pjstar.com/news/20181015/peoria-county-prepares-to-dedicate-new-war-memorial 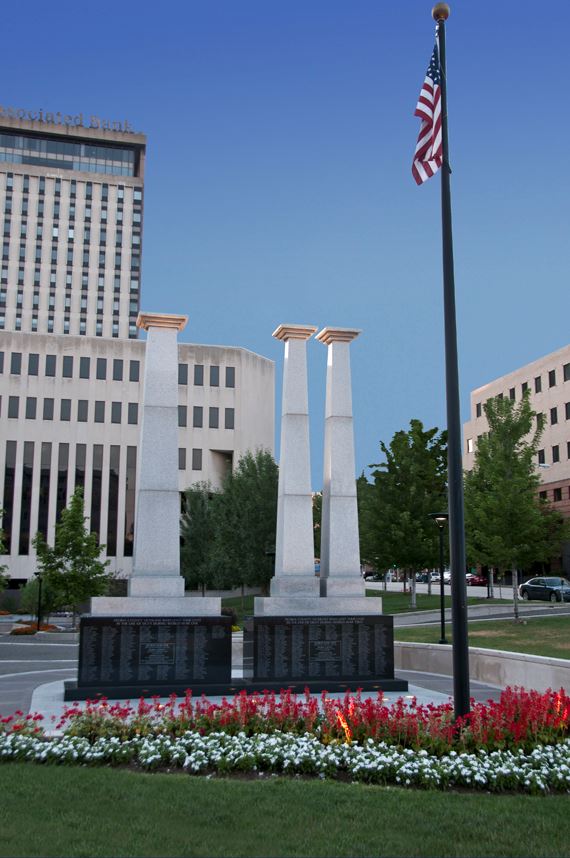 Dedicated in 2007, the World War I & II Memorial is located on the northeast corner of the Peoria County Courthouse square. The project was completed through the work of a dedicated committee, which designed, researched, fundraised, and oversaw the installation of the monument.

The World War I & II Veterans Memorial was dedicated May 27, 2007, after eight years of planning and fundraising. This was Peoria County's first war memorial since the Soldiers and Sailors Memorial, honoring Civil War Veterans, was dedicated in 1899. U.S. Army Retired General Wayne A. Downing was the keynote speaker.

The memorial honors the more than 28,000 Peoria County Veterans who served in the U.S. Armed Forces during these two wars. Engraved on it are the names of the 873 service members who lost their lives in the conflicts.

The memorial was designed by Jeffery Poss, Univerisity of Illinois professor, and Jim Ash of STS Consultants. William Aupperle & Sons was the general contractor. 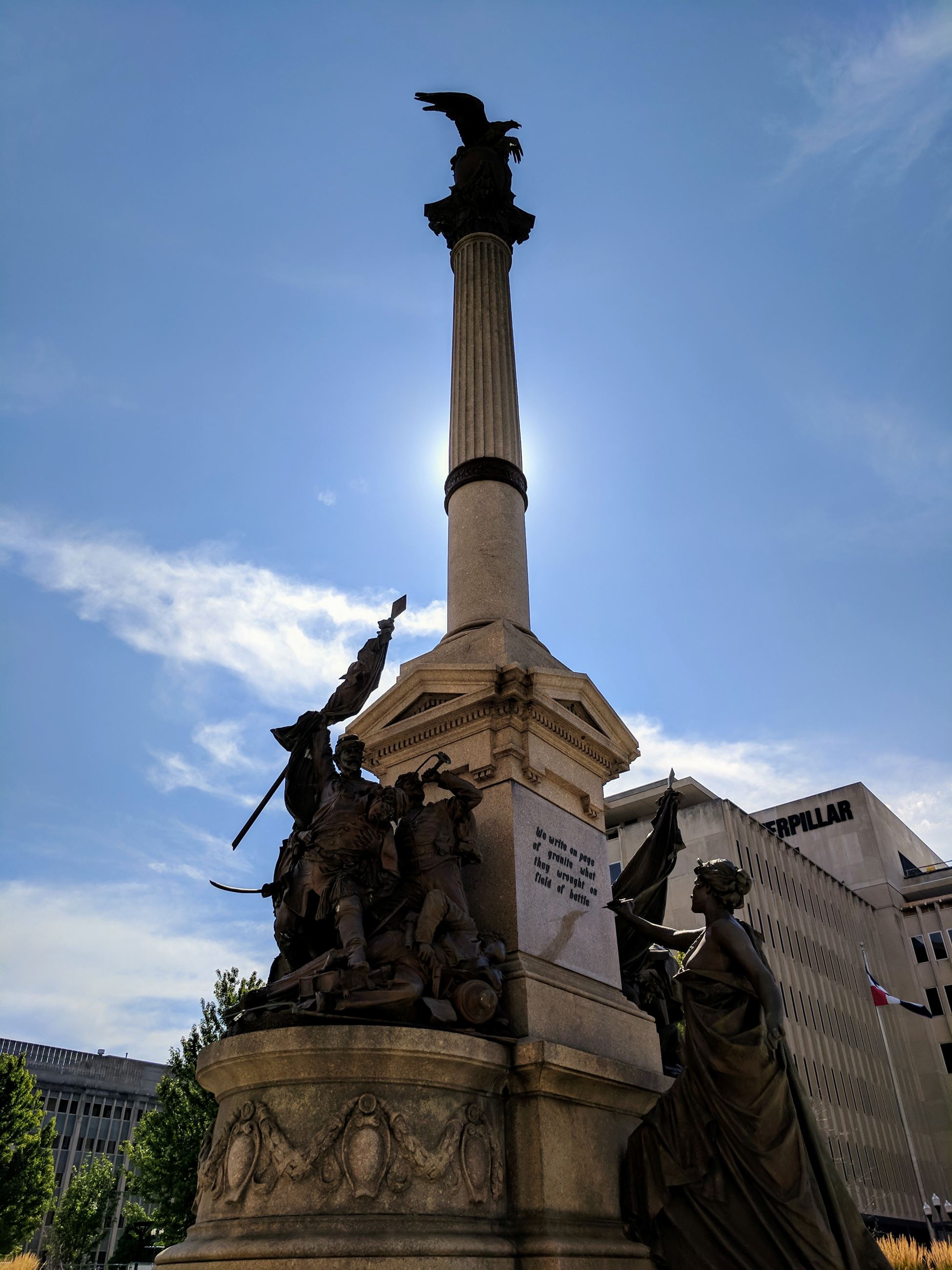 On October 6, 1899, the beautiful and impressive Civil War memorial, the Soldiers and Sailors Monument, was dedicated in front of a crowd of 70,000 that included President William McKinley. It stands on the southeast corner of the Peoria County Courthouse square.

The impetus to create the statue started in 1892. The Ladies' Memorial Day Association spearheaded the effort to create a memorial to Civil War veterans as more and more of them began to pass. They raised $40,000 for the project, including $10,000 from the Peoria County Board of Supervisors.

The monument was sculpted by Peoria native Fritz Triebel in his Rome, Italy studio. Standing 68 feet tall, it features a granite base and shaft with bronze figures and a scroll surrounding it. Triebel titled the monument "Defense of the Flag." Of the figures, Triebel wrote:

"Defense of the flag has six figures with the central figure been the captain cheering his companions and holding high the union colors after a successful battle. The cruel ball wounds the lieutenant who falls on the arm of his Captain. The drummer boy gently protects with one hand his wounded officer while the other has drawn his pistol ready to fire on the fleeing enemy. Back of the drummer Boy is an infantry-man ready to shoot while the trumpeter gives the signal to repose arms as the battle is won. The other figure is the wounded artilleryman." 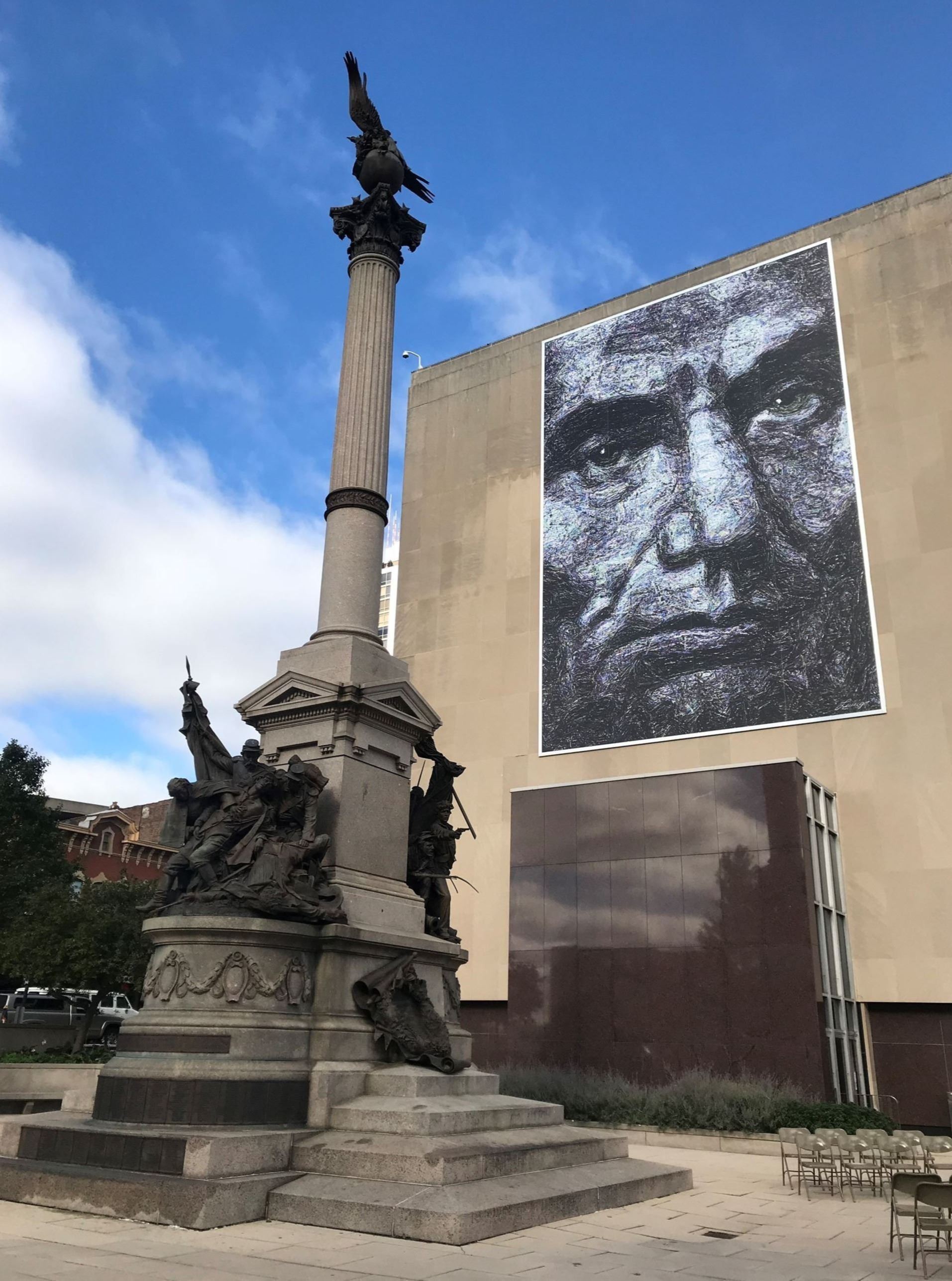 Not mentioned is the bronze statue of a woman writing "We write on page of granite what they wrought on field of battle" which is entitled "History Writing the Scroll of Fame." A bald eagle sits atop the monument, with an impressive 11-foot wingspan.

On the side of the Courthouse facing it is a large-scale art installation entitled "Abraham Blue," by local artist Doug Leunig. The 30'x50' framed mural celebrates Abraham Lincoln's historic speech in Peoria against slavery while also recognizing Lincoln's struggle with depression. It was dedicated on October 11, 2018, as part of the launch of the Big Picture Initiative.

Recently restored and resurrected at Springdale Cemetery by a group of committed citizens, The Shaft was originally dedicated on October 11, 1866, on the Main Street side of the former Peoria County Courthouse square. An estimated 30,000 people attended the dedication, which is especially impressive as the population of the County at that time was 19,000.

The Shaft honors the 600 Civil War veterans from Peoria County who gave their lives to preserve the United States of America. It is thought to be the first Civil War memorial erected in the State of Illinois.

The column is 30-feet high, with a bald eagle at the top. The inspiration for the eagle was Old Abe, a bald eagle who was the mascot for the 8th Wisconsin Volunteer Infantry Regiment. Old Abe flew over the crowd at the original dedication ceremony.

In the 1870s, the memorial was relocated to the Jefferson Street side of the Courthouse square. In 1962, The Shaft was dismantled and removed from the Courthouse grounds during the construction of a new courthouse. Some 50 years later, local residents Bruce Brown, Norman Kelly, and Bob Hoffer led efforts to find the missing memorial and fundraise for its eventual reconstruction. In 2017 the men located various pieces of the memorial at Detweiller Marina, but large portions of it were still missing.

Utilizing $175,000 obtained from donations from private citizens, local public entities (including $5000 from Peoria County), and the State of Illinois, the missing pieces were reconstructed and added to the recovered stone pieces.

More information on The Shaft: